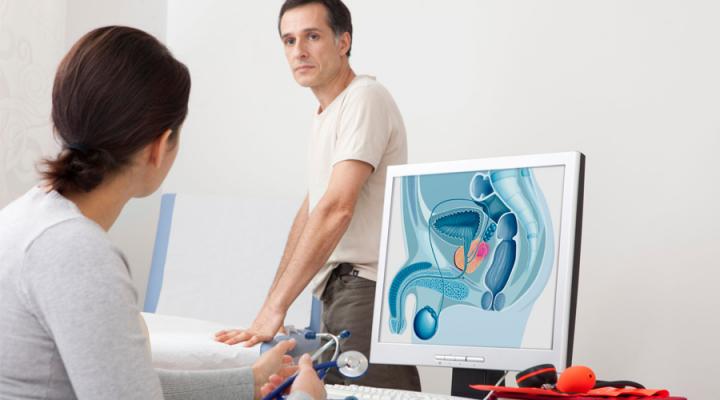 Prostatitis - an inflammation of the prostate tissue, its swelling. This is the most common urological disease in men aged 20-50 years. It is considered that after 30 years of suffering from prostatitis 30% of men over 40 - 40%, after 50 - 50%.

It is thought that the disease prostatitis in most cases due to the penetration of infection (contagious infestation). However, this is not entirely true. In a number of cases diseases have a not infectious in nature.

Prostate gland located under the bladder and covers the upper part of the urethra, and by increasing the size of its develops various disorders of urination. The size, shape and density are individual and undergo changes with aging men. Prostate gland has a complex nervous apparatus and even at minor pathological changes causes in both local and general disorder.

The main cause of prostatitis is caused by the peculiarities of the anatomical structure of the prostate gland and its blood supply.

Other Causes of prostatitis

In brief, can be identified  two main types of prostatitis: acute and chronic.

Acute prostatitis is different by chronic more bright symptom complex, treatment is carried out using large doses of antibiotics, and in some cases there is a need for surgery to remove the prostate abscesses.

Remember that disorders urination and pain symptoms can occur not only in the prostate, but also at an adenoma prostate (benign prostatic hyperplasia), or even prostate cancer. That is why, for the purpose of early diagnosis of possible prostate pathology, all men over 45 years old are encouraged to donate blood to the prostate-specific antigen (PSA).

Very often the disease develops  is hidden and gradually becomes chronic. If time does not pay attention, then a slight malaise can develop into a real nightmare. In the acute stage sometimes gives a fairly high temperature, pain in the perineum transform the process of urination and defecation in the feat. Can form an abscess - purulent fusion of tissues the prostate gland with all its consequences.

In the advanced form Prostatitis leads to the most serious complications that create a lot of problems not only to man, but the whole family. When prostatitis is not only reduced libido and is disrupted erectile function. The saddest thing is that approximately 40% of patients threatens some form of infertility, because the prostate gland can not produce sufficient quantities of high-quality secret for sperm motility. Because it is so important to treat prostatitis in the early stages of development.