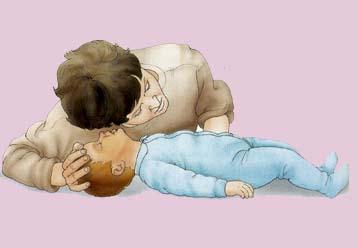 Fainting - a sudden brief loss of consciousness associated with a sharp outflow of blood from the brain. Clinically, this pathology looks as follows.

First, there are severe weakness, dizziness, nausea, ringing in the head, or darkening of the front sight in the eyes, discomfort in the abdomen and heart. The child turns pale and falls, collapsing to the floor.

This state can last from a few seconds up to 2-3 minutes, then a child is unconscious, not responding to an appeal to him, and the blood pressure is reduced, breathing and heartbeat weakened. Fainting even without assistance stoped by own, child wakes up. After fainting are typical feeling unwell, weakness, headache, discomfort in the heart and stomach, paleness, cold sweat.

It is necessary to distinguish a syncope from epileptic seizures, acute heart failure, comatose states. Small epileptic seizure is characterized by loss of consciousness for 1 2 seconds, a child "congeals" in any occupation with a fixed gaze; observed slight twitching of the eyelids or facial muscles.

Causes of syncope in Children

Frequent fainting cause some heart disease. Complete blockade of the conduction system of the heart, the blockade of Morgagni-Adams-Stokes clinically are manifested by bouts of loss of consciousness and seizures, accompaning by a sharp pale or bluish skin. Usually attack occurs at night, alone or requires emergency medical care.

The tactics of the first aid at fainting

If frequent fainting and without reason, need a serious survey of the existing pathology. Recall that fainting - one of the leading symptoms of serious heart disease, so the child is required to make an electrocardiogram (ECG).

The cause of frequent fainting sometimes are hysterical seizures when a child is consciously or unconsciously manipulates by adults. Such variations in the behavior of children treats psychiatrist.

If frequent fainting and without reason, need a serious survey of the existing pathology. Recall that fainting - one of the leading symptoms of serious heart disease, so the child is required to make an electrocardiogram (ECG).