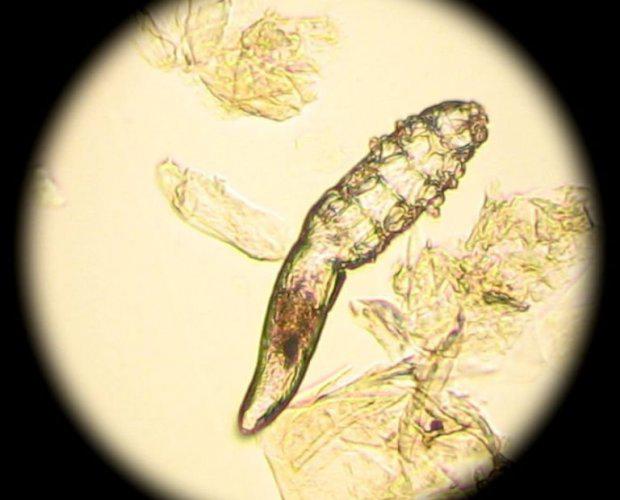 What is Demodicosis and Ways of Treatment?

Demodicosis - a skin disease affecting the skin and caused by the mite of acne Zheleznitsa (demodex).

Demodicosis affects only the skin of the face: cheeks, nose, forehead, chin, the skin around the lips, at least - eyelids. On the skin appear acne, inflammation, rash, skin reddens strongly, it may begin to peel.

So far the etiology of the disease remains unclear, however, can safely be called the reasons, his provoking and some characteristic features. The factors that are conducive to excessive reproduction of demodex are weakened immunity, chronic gastrointestinal disease, endocrine system diseases, hepatitis.

In addition, the disease can provoke prolonged and irrational use medicamental preparations containing glucocorticoids, hormone-containing cosmetics, as well as improper feeding (excessive passion with black coffee, alcohol, spicy food). Frequency of occurrence of skin lesions in women by almost two times higher than in men.

Eruptions are usually located on the face in the form of small papules (elevations on the skin) and pustules on reddened, inflamed, scaly skin, usually in the area of the openings of the hair follicles.

Demodicosis may resemble red or vulgaris acne, the initial manifestation of systemic connective tissue diseases of lupus erythematosus. The disease is a chronic, with exacerbations in spring and summer period.

In neglected forms of the disease are observed focal or diffuse thickening of the skin, the presence of serous, sometimes saniopurulent crusts.

Demodicosis is often combined with other skin diseases (rosacea, simple acne, etc.), as well as chronic inflammatory diseases of the eye (e.g. conjunctivitis).

Diagnosis is based on clinical manifestations and is confirmed using laboratory investigations: detection of a large number of subcutaneous mites in scrapings from the affected areas of the skin.

Sometimes performed histological examination of the skin (a piece of tissue from lesion focus). Thus is detected by dilation of blood vessels and a significant thickening of the walls, the proliferation of the sebaceous glands and cell destruction of follicles.

The duration of treatment depends on the degree of damage and deformation of the skin: it is on average three to four weeks, but severe form of demodicosis require treatment for several months, sometimes even years.