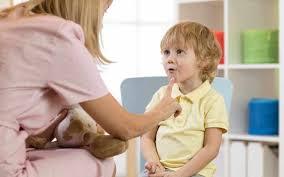 If a child stutters: recommendations for parents

Stuttering is a speech disorder characterized by multiple repetitions of words, syllables, and their lengthening. There are also stops during speech, which destroy its rhythmic flow.

Stuttering is classified into:

Logoneurosis, or neurotic stuttering. It occurs as a result of a traumatic situation in children prone to neurotic reactions, which arise due to the innate characteristics of the nervous system.

Neurosis-like stuttering. Unlike the first type, it arises gradually, when the child begins to speak in whole phrases. It can often be noticed that, in addition to speech problems, such a baby lags behind both in physical and mental development. A neurological examination of such a child will most likely reveal signs of a general lesion of the central nervous system, which are the reasons for stuttering in this case.

Experts distinguish between predisposing and provoking causes of stuttering.

Predisposing causes of stuttering include the following:

The provoking reasons for the appearance of logoneurosis:

The most common symptoms of stuttering are:

To diagnose logoneurosis, a child needs a consultation with a competent speech therapist, psychologist and pediatrician. Collection of anamnesis data, clarification of the factors that led to the appearance of the problem is important for the diagnosis of a speech defect.

During the examination of children with stuttering, specialists determine the form of pathology, the frequency of occurrence, the duration of speech seizures. By observing the patient's speech, the features of the rhythm of speech, voice, breathing are assessed. Experts pay close attention to the presence of accompanying movements, speech disorders.

In order to exclude concomitant diseases of the central nervous system, carry out:

Treatment for stuttering is complex, and should only be started after passing a comprehensive examination.

If it turns out that the child has a neurotic type of stuttering (logoneurosis), then the child psychologist will become the main specialist with whom you will be in contact. Its main tasks will be teaching ways of relaxation, relieving muscle and emotional tension, increasing the child's emotional resistance to stress, teaching parents how to effectively interact with the child, taking into account its properties of the nervous system. Also, the doctor can prescribe pharmacotherapy in the form of sedatives and drugs that relieve muscle spasms. And of course, as with any speech pathology, work with a speech therapist will be required.

In case of neurosis-like stuttering, it is more necessary to cooperate with a speech therapist-defectologist, because this type of stuttering requires more speech therapy assistance, which should be regular and continuous in order to teach the child to speak correctly. There is also a dynamic observation of a neurologist, who is likely to prescribe a long-term complex medication.

For a child to overcome stuttering, only working with specialists is not enough. It is important to learn how to interact constructively with the child and create a calm, understanding atmosphere in the house, otherwise the work of specialists will be useless.

Here's what you can do at home: