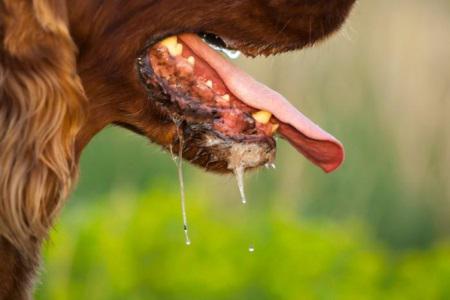 Rabies in humans, symptoms and treatment of rabies

Rabies is a dangerous viral disease that affects the brain and nervous system. Anyone who did not receive rabies vaccination, may be infected through the bite of an infected animal. If not promptly begin treatment, the disease will end in death.

Rabies is a zoonotic infection (transmitted to humans from animals). Infection is possible if the saliva of an infected animal gets into a person's blood. This can occur when the bite, or if the animal is first licked his claws, and then scratched the human. Also, there are cases of infection, when infected animal saliva gets on the open wound in the skin of the person.

Rabies can get ill all mammals, but more often people becomes infected with the disease from the following animals: dogs; the bats; Raccoons; proteins foxes; Jackals; Cats; Mongoose; monkey. Most often, the rabies virus is transmitted to humans through the bite of a sick dog.

If there is a suspicion of rabies, the treatment usually begin to full confirmation. The diagnostics of rabies is carried out in the event even of a minimal chance of infection. For example, if visit the forest, fox bite you, the doctor prescribes prophylactic treatment. The same treatment is given in the case of a bite of stray dogs. Laboratory diagnosis of rabies is possible only at the stage when a person has the primary symptoms. However, with the appearance of the symptoms, disease has already becomes a incurable.

The primary symptoms of rabies are usually minor, but soon they become very serious. The incubation period since infection with rabies virus usually lasts from two to twelve weeks. However, the terms of the incubation period, under certain conditions can be reduced to four days, or increased up to one year.

The primary symptoms of rabies:

About half of patients feel pain and tingling in the place of infection (bite). Primary symptoms are present from two to ten days, and then the disease goes into the second stage.

There are two types of current rabies a second stage:

1. Furious rabies. This form of the disease characterized by the following symptoms and signs:

- Sustained erection (in a men).

- In patients appear fear of water (hydrophobia). Initially, this condition begins as a sore throat and difficulties in swallowing, which then goes into spasm.

- The fear of bright light (photophobia).

After a few days after the appearance of these symptoms the victim falls into a coma and die from cardiac or pulmonary insufficiency.

2. Quiet rabies (paralytic). At the paralytic form of rabies is characterized by muscle weakness, loss of sensation and muscle paralysis. Usually it starts with paralysis of the arms and legs and spreads throughout the body. As with furious rabies, the patient has cramps and he dies of cardiac or pulmonary insufficiency.

When to see a Doctor?

If you are bitten by a dog, or bite or scratch a wild animal, be sure to contact your doctor.

Immediately after the bite, do the following:

- Wash the wound with water;

- Treat the wound with alcohol;

- Go to the nearest medical facility for help.

If in your area there is a risk infected rabies, to you will be carried out preventive treatment. This treatment includes a course of vaccination against rabies, which will prevent the spread of infection in the body and damage to the brain and nervous system.

If at the patient has already started to show symptoms, then treatment of the disease is almost useless and usually will end in death. That is why it is important to contact the hospital immediately after the bite, without delay visits to the doctor, even the next day.

One of the best preventive means against rabies is vaccination. In addition to prevention of the disease is not recommended to visit regions where sick rabies a wild and pets.